Wife caught bumbling husband cheating after he claimed he was ‘too sick’ to come to a family trip!

A cheating husband exposed after being caught on a video doorbell after previously telling his wife he was too sick to attend a family trip.

Home security has come on leaps and bounds since the invention of video doorbells – but one man discovered there are also downsides to such surveillance.

This was because the doorbell caught him apparently cheating on his wife.

The wife took to TikTok to share a clip of the footage from the doorbell, which showed her other half kissing a scantily clad woman before she got into a waiting car.

‘When your husband is too sick to go on the family trip you planned,’ she captioned the clip.

After the man checked to see if the coast was clear, the woman – who appeared to not be wearing any trousers – came out onto the porch.

At tat point, he pulled her in for a deep kiss and squeezed her bottom while the doorbell recorded the action. 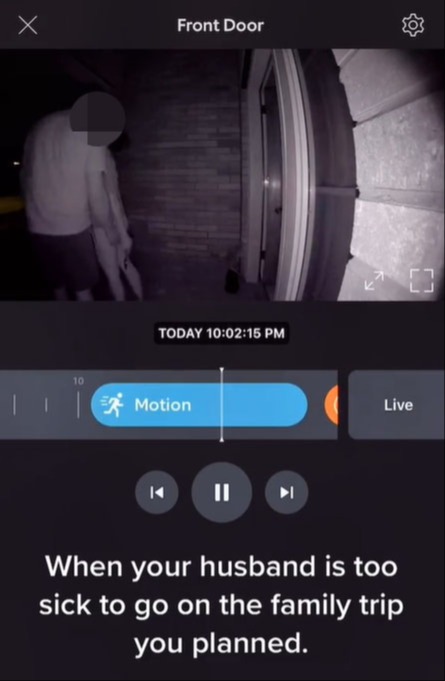 The comments section was quickly flooded by those who watched the incriminating video.

One person wrote: ‘The way he kissed her I thought that was you leaving for the family trip… Holy spirit activate.’

‘Thankfully she took the trash out for you. Time for bigger and better things for you,’ another person commented.

A third wrote: ‘Technology is beautiful.’

Responding to one commenter, the lady said that the locks had been changed and her husband ‘no longer resides here.’ 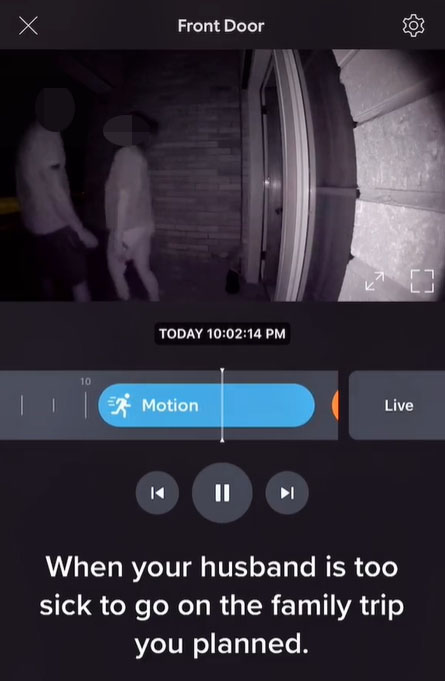 In another video on her account, someone asked if she was going to leave her spouse, to which she replied: ‘Abso-fucking-lutely.’

She also insisted that her husband ‘wasn’t the sharpest tool in the shed,’ adding: ‘He literally kissed her in front of a camera he had installed  himself.’

And when someone suggested that the woman shouldn’t be called a homewrecker, the wife replied: ‘My husband should take most of the blame and responsibility for opening the door to the affair, but this woman walked through it.’

The video has ben watched a staggering 5.3 million times since she first posted it.