Footage of the nude cyclists riding around Brighton have been posted to the website where it has now been viewed thousands of times.

The clip, titled WNBR Brighton 2019, features around five minutes of footage and the camera appears to pan to focus on a number of women as they rode past the camera.

Co-organiser of the event Steve Sims described it as ‘disturbing’ that some people continue to try and seek sexual gratification from its participants.

He said: ‘It is a continuous concern that there is a cohort of sad individuals who are unable to accept nudity without seeing it as an opportunity to aggrandise themselves among their equally sad associates by assigning sexual import to anyone without clothes. 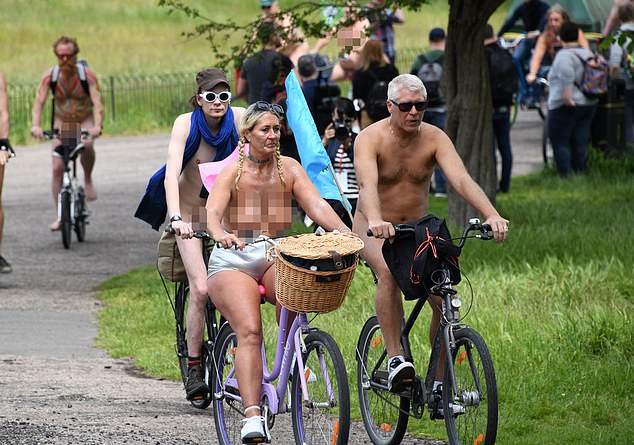 ‘They take photographs with the aim of either viewing them in private to achieve their own gratification or publishing them (without permission) where others may.

‘The movement is happy with videos of the rides being used to publicise them.

‘If such videos are posted to internet sites with the  aim of providing pornography then we can only commiserate with the friends and families of the sad and inadequate individuals who inhabit these spaces.’

Mr Sims said that although the law in the UK allows the photography of anyone in a public place, he said there was a ‘fine line between the taking pictures with the assistance of the subject, and the capture of images in a clandestine way.’

He said in so0me cases, people appear with huge ‘telephoto lens and a stepladder to pry.’ 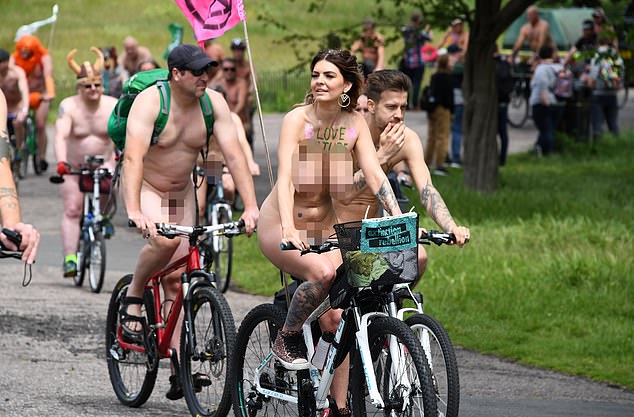 But several locals in Brighton said they were not surprised some people have taken advantage of the public display of nudity.

Shelly Muzzall wrote on Facebook: ‘What do they expect to happen when  they ride around stark bollock naked? I can imagine there’s some strange people who get off on that.’

Stephen Young added: ‘The naked bike ride has to be one of the worst events in the whole of the UK.

‘With so many smartphones in the world all with the feature of making videos, what did they think was going to happen?’

Last year was the first time the ride had taken place since it was called off during the Covid lockdown in 2020.

FIRST TIME SINCE 2019 THE BIKERIDE HAD TAKEN PLACE

Mr Sims described it as ‘an international protest movement.’

He added: ‘it has multiple aims, chief among these is to raise public awareness of the alternatives to the burning of fossil fuels for transport, whether directly or for the generation of electricity to power vehicles.

‘And that cycling is the most efficient form of human powered transport ever invented. 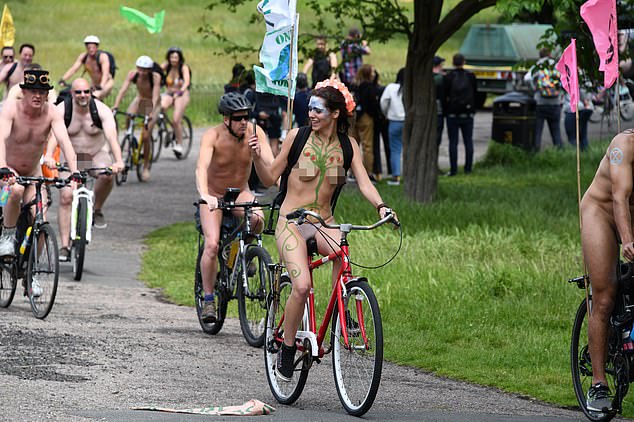 ‘The movement also promotes awareness of cyclists by motorists towards making cycling the safe alternative.

‘As part of raising awareness, the movement also supports the expression of freedom exemplified by the right to be naked in public, in a way that is non-threatening and raises the public profile of the annual protests all around the world.

‘The Brighton Naked Bike Ride is organised by a collective and we are planning to be running again in 2022.

‘[And] the Brighton event has been run since June 2006 and organisers say it has brought a heady mix of fearless frivolity, expression and eco-politics onto the streets of Brighton.’

Following negotiations with Sussex Police, participants were given permission to go ‘fully nude or as bare as you dare.’